Go is an abstract strategy board game for two players, in which the aim is to surround more territory than the opponent. The game was invented in China more than 2,500 years ago and is believed to be the oldest board game continuously played to the present day.

The playing pieces are called stones. One player uses the white stones and the other, black. The players take turns placing the stones on the vacant intersections ("points") of a board. Once placed on the board, stones may not be moved, but stones are removed from the board if "captured". Capture happens when a stone or group of stones is surrounded by opposing stones on all orthogonally-adjacent points.

The game proceeds until neither player wishes to make another move. When a game concludes, the winner is determined by counting each player's surrounded territory along with captured stones and komi (points added to the score of the player with the white stones as compensation for playing second). Games may also be terminated by resignation. A teacher might simplify the explanation by saying to a student "you may place your stone on any point on the board, but if I surround that stone, I will remove it." 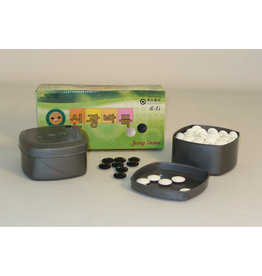