One Piece is an incredibly popular battle manga about pirates in a fantasy setting.

The One Piece Card Game is a game in which you build your own deck and battle an opponent.

Players will receive 2 of 4 Super Pre-Release Versions of the  STARTER DECKS to participate. Random selection but we will try to accommodate each players wishes at the time of the tournament!

Players must show up and participate to receive any product! If you don't show up, you will be refunded (as store credit) and your spot will be given to the next person who comes in to actually play! There are no exceptions to this! 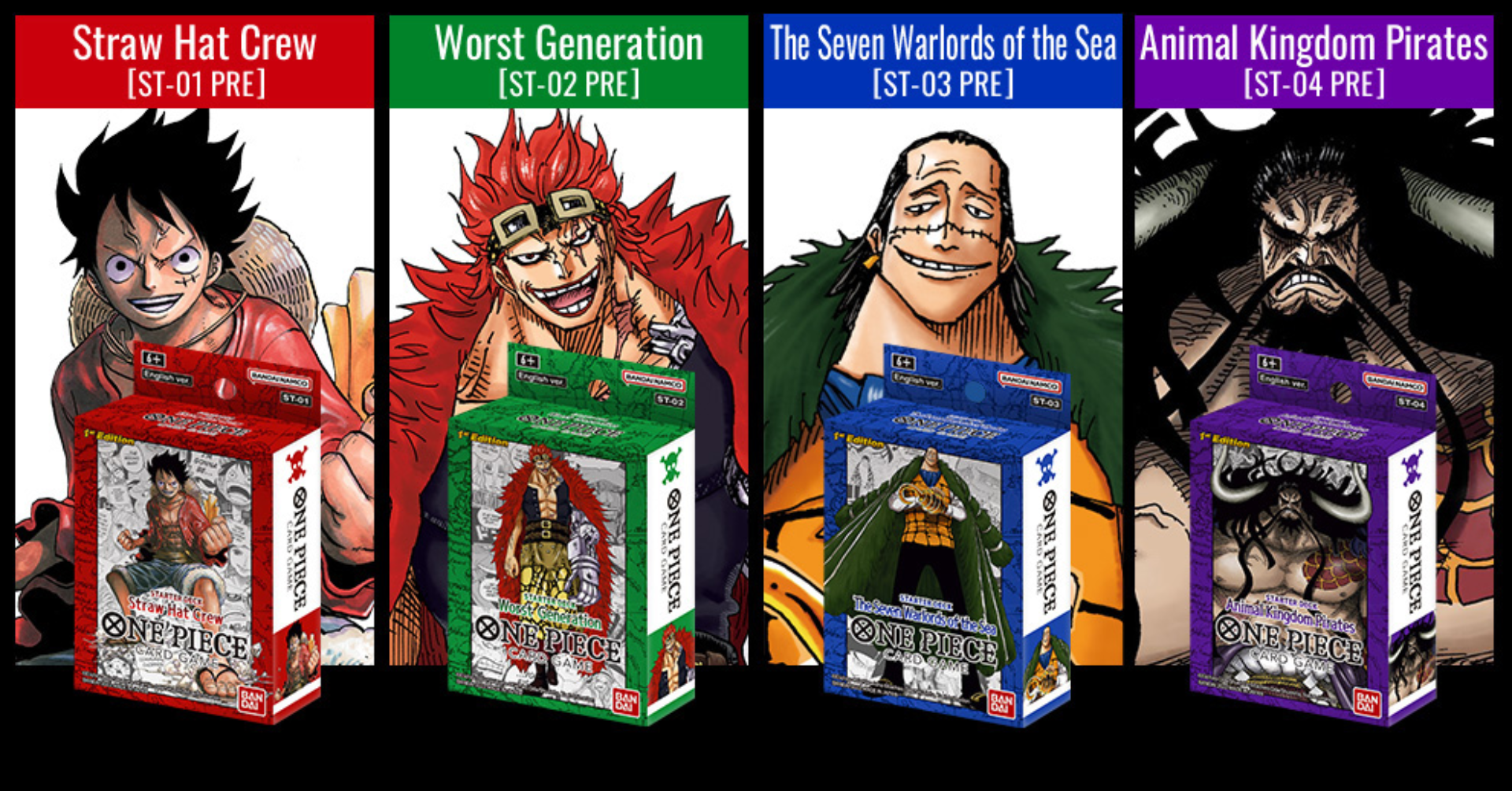 Promotion Pack 2022(5 cards per pack) - Based on supply availability

Registration is open the Bandai App.

Information will be updated here and on on our discord: Discord

One Piece is an incredibly popular battle manga about pirates in a fantasy setting. The story of One Piece follows a pirate named Monkey D. Luffy, who is on a journey to find the mythical treasure known as One Piece, and become the Pirate King. Over the course of the series, he adds new characters to his crew and comes into conflict with rival pirates and the marines. The world of One Piece is a good fit for a trading card game, as there are lots of characters with unique powers that can be translated into game mechanics, as well as different factions that can be used to tie different cards together.

Each One Piece Card Game deck will feature a single Leader/captain card and 50 cards that are of the same color as the Leader card. In addition to a Leader card, players can have Character cards, Event cards, and Location cards in their deck. Each Captain has a specific amount of Life, which is represented by pulling cards from the player's deck and placing it next to the captain. Both Luffy and Kaido have 5 Life, but it appears that some Leaders will have more or less Life than others. The goal of every One Piece Card Game match is to reduce an opponent's Leader to 0 Life.

Another interesting aspect of the game is how cards are played. Every card in One Piece Card Game has a "Don" cost (Don is a commonly used sound effect in One Piece equivalent to the beat of a drum.) In addition to a player's main deck, each player also has a ten-card Don deck that they can use to fuel a character's abilities or put them on the field of play. At the start of each turn, a player draws two Don and puts it into their Don area. They can spend Don to play characters, attach Don to characters to increase their power, or spend Don to activate certain ability. When Don is used, it returns to the Don Area, so it appears that players will gradually have more energy per turn as to use certain abilities.

Attacking and defending is a relatively simple process in One Piece Card Game. When a player attacks, they choose a target. The target has the opportunity to counter if they have the ability to do so. Otherwise, the card with the highest power wins. If the player has targeted their opponent's Leader, the opponent pulls one Life card and puts it into their hand. If they targeted another Character card, that card is discarded.